Pangani is a wonderful discovery! The quiet beaches are not easy to reach, but it is worth the effort for those who seek peace and tranquility. This tiny village is about 50 km south of Tanga and is still an untouched paradise.

Often overlooked by travelers, Pangani is a wonderful discovery! The quiet beaches of the mainland in Pangani are not easy to reach, but it is worth the effort for those who seek peace and tranquility in a real hideaway of tropical beauty rather than the hustle and bustle of the noisy and expensive islands. This tiny village is about 50 km south of Tanga and 170 km south of Mombasa and is still an untouched paradise.

Archaeologists have found the remains of small 15th century settlements on the cliffs north of Pangani. But the city only became known in the 19th century. It became an important point on the caravan routes under nominal Zanzibari rule from Lake Tanganyika. It was a major export point for slaves and ivory, and one of the largest ports between Bagamoyo and Mombasa. Sisal and copra plantations were established in the area. And several European missions and exploratory journeys to the interior began from here.

By the end of the 19th century, the focus had shifted to Tanga and Dar es Salaam. Pangani again faded into anonymity. From the 1860s onwards, large sugar and coconut plantations were established here. These were worked by slave laborers as Pangani was also an important centre of the slave trade.

Today the sleepy, dilapidated town makes for an intriguing step back into history. Residential buildings along the main street of Pangani give at least an impression of its history, as they feature both Arab and European architecture.

Pangani is a quiet place to rest and relax. It lays on the Indian Ocean and offers many things to do on your visit. It is a nice place to enjoy the beach, to go on snorkeling or diving excursions. Most of the lodges offer windsurfing, kayaking and dhow rides as well as fishing trips. Longer trips such as the one to Zanzibar Island, a cruise on the Pangani River or possibly even a trip further south to the recently demarcated Saadani national park can be arranged.

Along the seemingly endless coast lined with palm trees and coconuts are the lodges. A quiet place to rest and relax. Despite its secluded location there are a number of alternatives if you want more than just peace and quiet.

Snorkeling or diving excursions can be arranged with local fishermen. These Swahili fishermen are also more than willing to offer their services and take you to and from the sandbanks off the coast for a picnic in the sun. Although their ngalawas (wooden boats) are of somewhat rough manufacture, these small boats cut through the ocean like a knife. The coral reefs are not far from the coast. So if you are energetic, dive into this incredible underwater dreamland!

Or you can take the boat to a small sand island, Maziwi (newly designated as a marine reserve) rests on the coral reef. Most of the lodges offer windsurfing, kayaking and dhow rides as well as fishing trips. 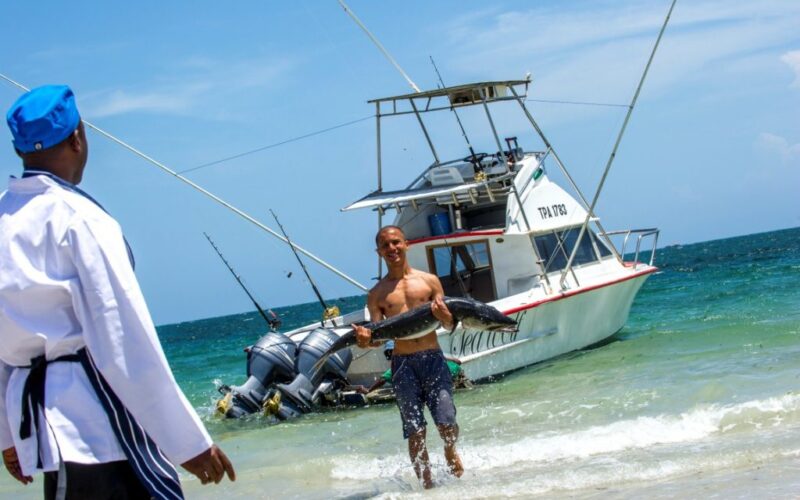 You can visit Pangani all year round but it is most enjoyed from june until november in order to make the most out of its beaches. January and February are also good months to visit Pangani.

My name is Ali and I am a guide in Pangani for 12 years. Our guests mainly like the quiet and relaxed feel of the town and its beautiful tropical beaches. Some guests enjoy all the water sport activities while others prefer to cruise on a dhow, discover the mangroves or just chill.

How long to stay?  2 days, depending on what you want to do