The Ndutu Region is part of Ngorongoro Conservation Area and stretches to the southern  Serengeti. The great migration reaches here with its 2 million animals to give birth to their calves and thousands of animals are born daily between the end of December and the beginning of March. This also attracts many predators like lions and hyenas!

The Ndutu Region is part of Ngorongoro Conservation Area. It stretches to the unfenced southern part of the Serengeti National Park. There is plenty of resident wildlife such as elephants, hyenas, giraffes and big cats to be found all year round.

Great Migration in the region

At the end of December the great migration usually arrives with its 2 million animals in Ndutu. Wildebeests, zebras and gazelles come here to give birth to their calves and stay here until April. Thousands of animals are born every day from December to March. The grass in this area is rich in nutrients for young animals. And because it is short, the adults can spot approaching predators from far. It is therefore a safe place to raise young zebras and wildebeests. Ndutu is a very beautiful region and rich in wild animals. In addition, it is the only nature reserve in Tanzania where you are allowed to drive off-road. This allows you to get very close to the animals. Many predators are attracted by the calving happening here and roam this vast plain: lions, cheetahs, leopards, hyenas and hundreds of wild dogs!

The best game viewing spot is around Lake Ndutu, where enormous herds congregate. It is a shallow alkaline lake that is located on the eastern border of Serengeti national park. In 1973, the shores of lake Ndutu were the location of an archaeological excavation site about 140 square meters that led to the discovery of the Ndutu cranium and several remains of tools from over 500.000 years ago.
Today it serves as a water source for the animals and shares the same basin as lake Masek that is located a short distance east of it – but inside Ngorongoro conservation area.
The forests and granite Kopjes around Lake Ndutu are also home to lots of game outside of the migration months. 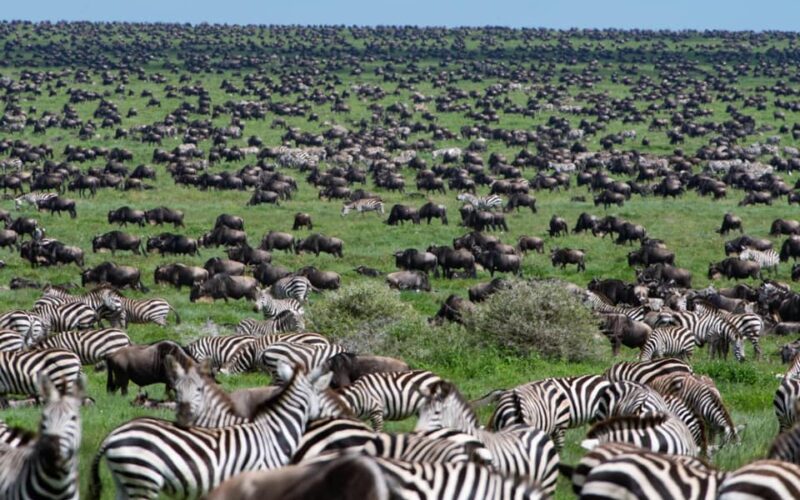 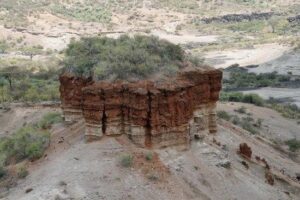 Olduvai Gorge (Maasai spelling is Oldupai, which means “the place of the wild sisal”) is one of the world’s most significant paleoanthropological sites. It is a steep-sided ravine in the Great Rift Valley, about 48 km long. Located 25 km from Lake Ndutu and Lake Masek, the gorge cuts into Pleistocene lake bed sediments up to a depth of 90 m.  Remains of the earliest evidence of the existence of our human ancestors were found here that have proven invaluable in furthering understanding of early human evolution. The hundreds of fossils (bones) discovered here date back millions of years.

You can also visit a small museum at this spot to learn about the fascinating excavations and discoveries that have taken place here.

The best months to visit Ndutu Region are from end of December, when the Great Migration herds start to arrive from the north, until April when the millions of wildebeest, zebra and gazelle start trekking northwards again. In the early months of the year – with a peak in February and March – the wildebeest herds are calving on the grassy plains.

My name is Hamisi and I am a guide in Ndutu for 15 years. Most of our guests are impressed to see so many animals at once! Of course the Great Wildebeest Migration is an amazing spectacle to witness for all our guests. Watching the young being born and making their first steps is a great experience and offers plenty opportunities for fantastic photographs.