Lake Natron, known from the famous mountain of god, Ol Doinyo Lengai, an authentic Maasai village and the beautiful lake itself! A very beautiful landscape that differs from all other parks with a lot of things to do! Lets get out of the car and enjoy the activities around Lake Natron!

Lake Natron is a salt or soda lake not far from Lake Manyara in northern Tanzania. It is located in the Gregory Rift, the eastern branch of the East African Rift. The lake lays at the foot of the Ol Doinyo Lengai, an active volcano.

Lake Natron is quite shallow, less than three meters deep, and varies in width depending on its water level. The lake is 57 kilometers long and 22 kilometers wide. The area receives irregular seasonal rainfall, mainly between December and May. The temperatures at the lake are often over 40 ° C.

As the fresh water evaporates in the lake, water with high concentrations of salt minerals such as sodium and trona remains. The alkalinity of the lake can reach a pH level of more than 12. Special bacteria and blue algae thrive in this environment and form an ideal breeding ground for the life of birds. Such halophilic organisms include some cyano bacteria that, like plants, produce their own food through photosynthesis. The red pigment in those cyano bacteria produces the deep red colors of the lake’s waters and the orange colors in the shallow areas. Salt-loving microorganisms living there are coloring the alkali salt crust on the surface of the lake is red or pink.

Flamingos find a safe breeding ground at Lake Natron, since most other animals find its caustic environment and high temperature of the lake (up to 60°C) as well as its high salinity inhospitable. It therefore provides a good barrier against predators trying to reach nests on seasonal evaporation islands. Every year, more than two million flamingos come here to lay their eggs and chicks hatch between September and April. Cyanobacteria are increasing with the salinity of the water, and the lake can carry more nests. Larger flamingos also breed in the Wadden Sea.

Other animals in Lake Natron

Some fish species (such as tilapia) can survive in the slightly less salty water near the shore. Lake Natron is also home to some endemic algae, invertebrates and other birds. Tens of thousands of other birds can be spotted near the lake, making Lake Natron a prime destination for bird lovers in Africa. 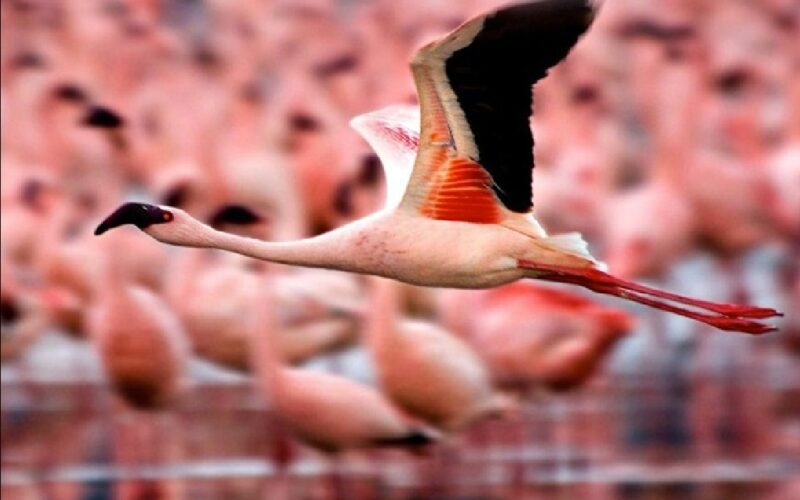 My name is Bosco and I’m already bringing visitors to Lake Natron for over 20 years. Natron is a well appreciated place by our guests. This is also because it is different from all other game drives and it gives people the chance to stretch the legs, and do some other activities before continue with safari. From the end of July we often go from Lake Natron to Northern Serengeti to see the river crossings.

How long to stay? Not less than 2 nights

It is hard to predict when the flamingos are in Lake Natron, especially the last years it has changed a bit and it all depends on the rainfall. The problem with Lake Natron is that you have to avoid it in the more wet seasons, because there is a very high chance that your car gets stuck in the mud. Therefore from July – October are the best time to reach Lake Natron by car.