Selous Game Reserve in southern Tanzania is one of the largest game reserves in the world! It has a large number of wildlife such as lions, leopards, the endangered black rhinos, hippos and crocodiles, East African wild dogs, Masai giraffes and many more!

The Selous Game Reserve is one of the largest protected areas in the world. It is located in southern Tanzania. Since 1982 it is a UNESCO World Heritage Site. This is due to its wildlife diversity and undisturbed nature you can find here. Although it lays far from Tanzania’s northern national parks, it it worth a visit. With a total area of 50,000 km2 and additional buffer zones it’s even bigger than Denmark!

There are a huge number of wildlife animals you can find when on safari in Selous game reserve. Lions, leopards, hippos and crocodiles live in Selous. You can spot endangered black rhinos, hard-to-find East African wild dogs as well as hyenas. Cape buffaloes, Masai giraffes, wildebeests and zebras live here too,the latter two are known by the great migration! And of course it is home to impalas, large numbers of Lichtenstein’s hartebeests, waterbucks and sable antelope in addition to elands and bushbucks. It is much quieter here than in the other parks, so you definitely have the chance of a unique experience during your Tanzania vacation! Selous game reserve was previously home to a very large number of many African bush elephants. Unfortunately numbers have greatly reduced because of excessive poaching happening in the game reserve.

Birds in the Selous Game Reserve

Selous game reserve is home to thousands of birds. Scientists have recorded over 445 different birds species that live in the various habitats within the Selous. The giant kingfishers, the pink backed pelican as well as the African skimmer live for instance near the lake areas. Along the sandbanks you will see the white-fronted bee-eater, fish eagle, carmine, ibises and palmnut vultures. The purple-crested turaco, yellow-billed stork, trumpeter hornbill, white-crowned spur-winged plovers, malachite kingfishers and various small waders are among the other water birds that you can see in Selous Game Reserve, as well migrant species. 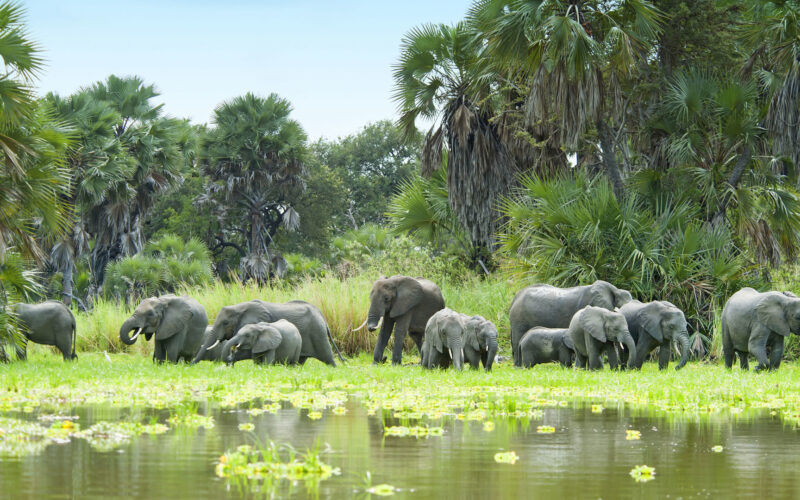 The Rufiji River, which flows into the Indian Ocean opposite Mafia Island, crosses the entire reserve. Around this river is a swampy area with an enormous amount of crocodiles. The Stiegler Gorge is a special attraction here. This is a gap 100 meters deep and 100 meters wide. 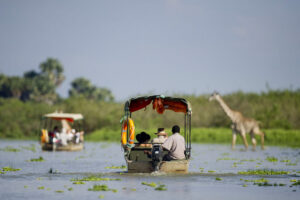 Selous is also one of the few national parks where you can go on a boat safari. It is also one of the few parks that allows walking safari. It is an ideal trip if you want to enjoy the beautiful scenery of the Rufiji River with its many hippos, crocodiles and beautiful bird-life. The sunset can also be stunning from the boat- there is nothing quite like the serenity of the river while the sun dips below the horizon.

The best time to visit Selous is the dry season from June to October. The wildlife is easier to spot because the vegetation isn’t thick and the wild animals have gathered around the known water sources. Subsequent towards the end of the heavy rain, the roads are extremely impassable and many of the camps are closed as the wet season comes to an end. A good time to observe the scarce wild dogs is during their denning phase that begins in June and lasts till August.

My name is Nixon and I am a guide at Selous for 16 years. Most of our guests are impressed to see so many animals that live near the water like the hippos and crocodiles. A walk to the Stiegler gorge is a welcome change from the jeep safari and our clients do enjoy it.

How long to stay? At least 3 days including your arrival and departure day, because those days are actually not full days. In this case is only the second day a full day.

Some tips on when and how you can best be /get there: