Bagamoyo city is an old settlement and was once one of the most important trading ports on the East African coast. Trade goods were first fish, salt and rubber and in the first half of the 19th century for ivory and the slaves. The Kaole ruins nearby are the remains of two mosques and 30 graves from the 13th century.

Bagamoyo city was founded at the end of the 18th century. It is an extension of the much older settlement Kaole from the 8th century. Bagamoyo was even once the capital of German East Africa and one of the most important trading ports on the East African coast.

In the Kaole ruins are the remains of two mosques and 30 graves from the 13th century. Around the 17th century the settlement began to grow 2-3 miles north of Kaole. This area grew in prosperity in the 18th century. It got name Bagamoyo as an important station in the caravan trade (the name means “relief and rest”). Until the 18th century, it was a small trading centre where the majority of the population were fishermen and farmers.

The most important trade goods were fish, salt and rubber. In the first half of the 19th century the city became a trading port for ivory and the slave trade. Traders came from the African interior on their way to Zanzibar. This explains the meaning of the word Bagamoyo (“Bwaga-Moyo”). In Kiswahili it means “lay down your heart”. Either the name might have been given due to the slave trade that passed through the city (“give up all hope”). Or because of the porters who rested in Bagamoyo after carrying 35 pounds of cargo from the Great Lakes region on their shoulders (“unload and rest”).

Many European explorers, including Richard Burton, Henry Morton Stanley and David Livingstone, began and ended their journeys here. In 1868 French missionaries founded Freedom Village in Bagamoyo as a shelter for freed slaves. For the rest of the century the town served as a stopover for missionaries travelling inland from Zanzibar. When the German Empire decided in 1905 to build a railway from Dar Es Salam to the interior, Bagamoyo’s importance began to decline and today Bagamoyo is a centre for the construction of dhow sailboats.

The government is working to preserve the colonial ruins in and around Bagamoyo and to revive the city. Bagamoyo’s tranquil pace and fascinating history make it a pleasant day or weekend trip.

With its cobwebbed portals and crumbling German-era colonial buildings, central Bagamoyo is well worth exploration. The most interesting area is along Ocean Rd where you’ll find the old German boma, built in 1897, and Liku House, which served as the German administrative headquarters. On the beach is the German customs house (1895). At Bagamoyo’s port you can watch boat builders at work and a busy fish market. Further south is the mid-19th-century Old Fort.

Just southeast of Bagamoyo are these atmospheric ruins. At their centre are the remains of a 13th-century mosque, which is one of the oldest in mainland Tanzania and also one of the oldest in East Africa. It was built in the days when the Sultan of Kilwa held sway over coastal trade, and long before Bagamoyo had assumed any significance. Nearby is a second mosque, dating from the 15th century, and about 22 graves, many dating from the same period.

Located about 500m southeast of Bagamoyo along the road to Dar es Salaam is this renowned theatre and arts college, home of the national dance company. When school is in session there are occasional performances, and it’s usually possible to arrange drumming or dancing lessons. The annual highlight is the Bagamoyo Arts Festival, usually held around late September or October.

About 2km northwest of town is the Catholic mission and museum, one of Bagamoyo’s highlights, with well-labelled displays from Bagamoyo’s heyday. In the same compound is the chapel where Livingstone’s body was laid before being taken to Zanzibar Town en route to Westminster Abbey. The mission dates from the 1868 establishment of Freedom Village and is the oldest in Tanzania.

This undistinguished museum has a small display documenting the slave trade. More interesting than the present museum is the site at which it is built, which was formerly the starting point for slave and trade caravans to the interior. 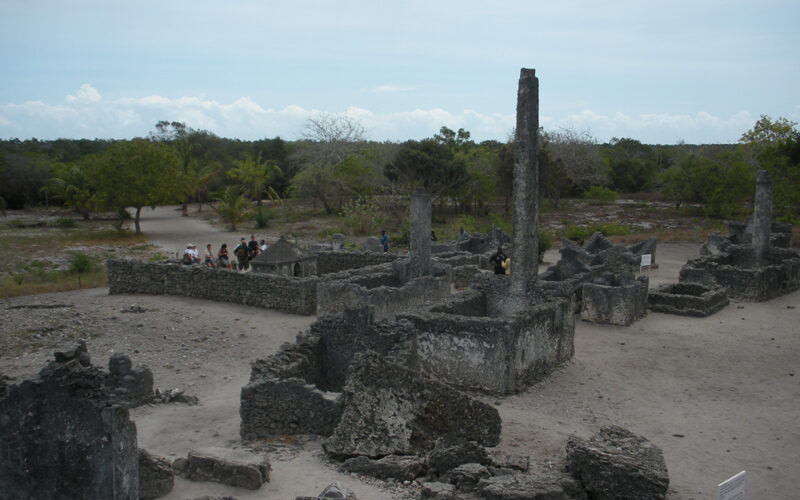 The best time to visit is between the months of June through October because this is the dry season when rainfall is almost non-existent. At this time, the skies are clear and the waters of the sea are a stunning sapphire blue with contrasting azure. The annual highlight is the Bagamoyo Arts Festival, usually held around late September or October.

My name is Hassan and I am a guide in Bagamoyo for 13 years. Our guests come here mainly because the area is full of Tanzania’s history. They feel like walking in a long gone era when Sultans ruled the country and slaves were sold and shipped to foreign places.